Deep Freeze: What Lies Ahead for the Region

Do you remember the first time you heard of a "polar vortex?" Likely, it was January 2014, a year that started out with a historic deep freeze that shattered temperature records, landing 2014 on the National Oceanic and Atmospheric Administration (NOAA) list of the “Top Ten Coldest Years in Indiana’s History.” For the first time, weather forecasters were suddenly hit with a blizzard of requests to explain what the “polar vortex” is and what it isn’t (i.e. it isn’t a polar snow tornado!). We soon learned that it was caused by frigid polar air from the Arctic descending over the Chicagoland region in a highly unusual event (National Weather Service, 2014). Dial forward to January 2019 when weather forecasters began warning the region to prepare themselves for a dangerous, “historic” deep freeze that would bring the region to a stand-still for days on end (Leone & Malagro, 2019; Samenow, 2018 & 2019). The “polar vortex” had returned and round two was a force to be reckoned with - even for those with plenty of experience dealing with the ups and downs of winter in the Midwest (Malagro et al., 2019).

So, what caused the return of the dreaded “polar vortex” over the Midwest in January of 2019?
Is this a new pattern with links to climate change?
If it happened twice in the past five years, is it possible it will continue to happen?
But if it’s cold outside, there can’t be global warming…right...?!?

What caused the return of the dreaded “polar vortex?”

While the term “polar vortex” has been mainstreamed to explain the events in 2014 and 2019, in reality there are actually two different kinds of rotating air masses or “polar vortex” systems centered over the north pole. Experts on the subject recently clarified the distinction to avoid ongoing confusion: the one that touches the ground and impacts our weather directly is

The unprecedented blast of polar air that descended over the Midwest in January 2019 had its origin in a “Sudden Stratospheric Warming” event that took place a few weeks earlier over the north pole (Samenow, 2018 & 2019). This “Sudden Stratospheric Warming” event displaced the jet stream (i.e. the boundary of the “Tropospheric Polar Vortex”) causing the frigid stratospheric polar air in the "Stratospheric Polar Vortex" to descend down to ground-level and spill out over the Midwest-locking the region into a dangerous deep freeze, i.e. what the news calls the "polar vortex."  If the jet stream had remained in place as it does during typical winters, the “Stratospheric Polar Vortex” would have done what it always does: rotate in place high above the north pole during the dark, sunless, polar winter until the spring when the sun's warmth would cause it to weaken and dissipate until the fall when the cycle would begin anew.

Is this a new pattern with links to climate change?

So, what was the cause of the “Sudden Stratospheric Warming” event that displaced the jet stream and plunged the Midwest into another Arctic-style deep freeze? The scientific evidence is pointing to several causes with links to climate change, in particular, the ongoing decline in Arctic sea ice (Mooney, 2018; NOAA, 2018). A loss of Arctic sea-ice has the capacity to destabilize the jet stream which then destabilizes the “Stratospheric Polar Vortex.” This results in frigid air that is usually locked away high up in the stratosphere to plummet to the ground and spill out over the temperate mid-latitudes like the Midwest (Samenow, 2018; Waugh et al., 2017; Kim et al., 2014).

Interestingly, another “Sudden Stratospheric Warming” event the press termed “The Beast from the East” occurred in 2018 causing an unprecedented deep freeze over mid-latitudes in Eurasia (Samenow, 2018; Burke, 2018). In the aftermath of the Eurasian polar plunge, the same pattern circled the globe hitting the Midwest in March with effects lasting through the end of April 2018.  So, it appears that there were not two, but three of these “polar vortex” events within the past five years.

If it happened three times in the past five years, is it possible it will continue to happen?

Considering that Arctic sea ice is at historic lows with no signs of recovering (NOAA, 2018; Mooney, 2018), it follows that disruptions to the “Stratospheric Polar Vortex” may continue. Indeed, dark ocean waters absorb more solar radiation which causes them to warm up. This leads to a positive feedback response that melts more sea ice, which exposes a larger area of dark ocean water that then absorbs more radiation, warms up even more, melts more ice and so on. While it is already clear that an ice-free Arctic will have dramatic implications for climate change (NOAA 2018) monitoring the impact of unprecedented deep freezes in mid-latitudes like Northwest Indiana is certainly warranted. This latest round of polar weather resulted in widespread disruption including burst water pipes, school and work closings, power outages, the shut-down of commuter rail lines, flight cancellations and a blanket-warning that the risk of frostbite was so severe that it was too dangerous to go outside at all. These impacts were felt from Tuesday through Thursday with an estimated economic loss to the U.S. of $5 billion dollars (Roach, 2019).

If it’s cold outside, there can’t be global warming….?!?

Global average temperatures are increasing at a rate that is disrupting climate patterns around the planet. It is important to recognize that these global averages take into consideration all observed conditions around the world, all year. It is also important to recognize that the earth is round and the temperature is not the same all over the planet. 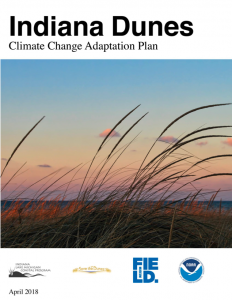 An easy example for when this all gets confusing is that when it is winter in the Northern Hemisphere’s mid-latitudes, it is summer in the Southern Hemisphere’s mid-latitudes! This actually makes the upward warming trend more alarming. Our friends over in Australia can definitely tell you that something is awry. In recent weeks the temperature over there has also broken records – but with searing heat waves causing wide-spread disruption for people and the environment (Zhou, 2019). In fact, according to the World Meteorological Organization, the past four years were the hottest on record globally (WMO, 2018).

As with all good scientific inquiry, more questions have been raised leading to more answers being found that are based on data, observation, and the good old scientific method. In Northwest Indiana we have a head start with the Indiana Dunes Climate Change Adaptation Plan that Save the Dunes and partners completed last year. Additional resources to help us chart the way are found at the Purdue University’s Climate Change Research Center, the U.S. Global Change Research Program’s Fourth National Climate Assessment and the Intergovernmental Panel on Climate Change’s large library of reports. At Save the Dunes, we will continue to engage in the important work that will ensure we chart a sustainable future ahead for all of us in NWI. Stay tuned for more insight and opportunity to help us Save the Dunes!

Malagon, E., et al., (2019), “Chicago grinds to a halt as polar vortex cold snap begins: ‘Today is about as cold as it can get in Chicago.” The Chicago Tribune.

Mooney, Chris (2018), “The Arctic Ocean has lost 95 percent of its oldest ice – a startling sign of what’s to come.” Energy and Environment Section, The Washington Post.

Roach, J. (2019), “Polar vortex’s bitter cold could cost US economy $5 billion, though the worst may be over.” AccuWeather.com.

Waugh et al., (2017). “What is the Polar Vortex and How Does it Influence Weather?” Essay, Bulletin of the American Meteorological Society.